Burca and Ozgur Gursu and their son Arden are originally from Turkey. When Arden was a baby, he was diagnosed with Early Onset Infantile Scoliosis (EOIS). The majority of children diagnosed with EOIS are between the ages of 10 and 15 with adolescent idiopathic scoliosis. Identifying scoliosis at birth or in early childhood is rare and is predominantly seen in boys. EOIS treatment is not available in their country so the family travels from Turkey to see specialists at Shriners Hospital, where he is being fitted with Serial Mehta Casting and receiving therapy associated with the procedure.

“The most important aspect of staying at The Ronald McDonald House is the people here and how welcoming and understanding they are. It is already hard having a toddler with such a condition and being an international patient where we need to fly back and forth”, says Burca. She explained how important it is to have someone around who understands the challenges they are facing, and what a relief it is from a psychological standpoint considering her son is only 3 years old. She says the House has not just helped her son, but it helps their entire family because they feel so “at home” here, which is significantly important when they already have so much to deal with, plus, her son loves it here! Once he discovered the playroom and playground, it became his favorite travel destination! She uses that fact to convince him to travel the approximate 6,000 miles from home, because she tells him they are coming here rather than saying it’s a hospital visit.

Burca remembers the first time Arden saw the play room and the doll house; he was simply thrilled with it and still loves spending time there. The first time they came to Greenville and met other families she felt comfort knowing that it wasn’t just them going through struggles. She loves knowing that the House provides a chance for many to share their stories and support one another. One thing that surprised her about the House is the people here are very welcoming and supportive, the families staying here as well as staff and volunteers. Every time she comes to the house, she doesn’t feel like she’s staying away from home because it’s almost as if she’s met everyone before!

She thanks everyone involved with the house for their warm heart and how much they do for the families. She wishes for her son to receive the best possible solution from his therapy and hopes to support other families and patients in need as they are experiencing similar challenges. 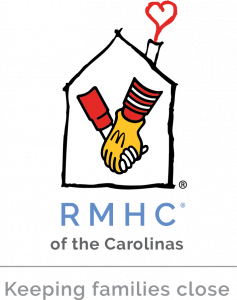 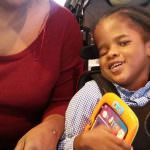